The annual celebration of Black History Month in schools is contested by some, and for polarised reasons. Some claim that to celebrate a specific demographic is exclusionary and that we should, instead, celebrate ‘diversity’ in its entirety. Some reject the month-long spotlight as ‘tokenistic’ and express outrage that the teaching of Black History should be confined to just one month of the year. Unfortunately, both objections are miscalculated, with the former failing to recognise the origins of the celebrations, and the latter being based on seemingly excessive, though well intentioned, optimism.

Proponents of so called ‘diversity month’ risk (whether deliberately or otherwise) a continuation of the erasure of Black British achievement. Though originating in America, Black History Month began to be recognised in the UK from the late 1980s as part of a commitment recognising the contributions of Black people to the cultural, economic and political life of the UK. The necessity of recognising the month lay in the fact that, previously, Black British contributions throughout history had not even been acknowledged, let alone celebrated. It is important to question then, why anyone would seek to water down or even erase such a specific celebration. It is important to question why the proponents of ‘diversity’ are so keen for their desired month to replace, rather than be established in addition to Black History Month? It is important to question why these saviours, so intent on recognising ‘diverse’ contributions to society, are so intent on this taking place within one month only, rather than seeking to ensure diversity is celebrated all year round. Those that prioritise adapting the focus of Black History appear to do so with an unsettling agenda, as though they want to remove any emphasis on blackness whilst simultaneously preventing other marginalised groups from being recognised for too long.

In contrast, those that challenge the tokenism of Black History Month do so to demonstrate their commitment to recognising Black achievements throughout the entire 12 months of the year. In principle, this view is reassuring, and many school history departments are now seeking to make curriculum adaptations to include African Kingdoms, Black Tudors and migration over time. These changes are fascinating and exciting and will transform the education of those students that are exposed to them. For Black students, to see themselves in the curriculum on a long-term basis is a fundamental right that will do much to reduce the feelings of alienation that so many of us experienced as a result of growing up with an entirely white-washed curriculum. For white British students, particularly those from predominantly white British areas, to see positive examples of Black History in the curriculum may serve to prevent the emergence of misconceptions linked into race and contributions to society. There is no doubt that the students in schools embarking on long-term curriculum change will have better, more authentic experiences of Black History than those that recognise such history for one month only.

And what about the other departments? Is it enough for history departments alone to incorporate Black History into schemes of work, whilst in English, Maths and Science there is no recognition of Black contribution? Even where a Black poet, or mathematician, or scientist is mentioned, does this provide students with an insight into the importance of embracing Black British History? Or is this, in fact, tokenistic in itself?

Although, in an ideal world, every staff member in every department would be willing to make long-term curriculum changes, unfortunately this is not currently the case. Condemning Black History Month as entirely tokenistic may result in the celebration being stripped from the schools that need it most, and not necessarily in return for curriculum adaptation. It is also important to note that celebrating Black History Month and committing to long-term changes do not have to be mutually exclusive. Schools can adapt the curriculum, so that Black contributions are weaved into students’ everyday experiences, but they can also recognise and reiterate the importance of doing so every October. For students to be told and retold the origins of Black History Month may contribute to raising a generation of young people who can use this knowledge to instigate permanent change in the previously mentioned areas.

Rather than debating the necessity or utility of Black History Month, time would be better spent understanding, and subsequently challenging, the origins of school curriculums that ignore Black contributions entirely. Why do some leaders immediately shrink away from this type of curriculum reform in the name of ‘increased workload’? Why is Black British History a more difficult area for teachers to research, in comparison to other histories? Why is it only now, in 2021, that the major exam boards have recognised, and committed to challenge, the lack of diversity they have preserved for so long?  The answer is largely straightforward. For too long, the epistemology of marginalised groups has been disregarded and only the voices of the dominant culture have been heard. To orchestrate change in this area, we must hear more Black academic voices in the UK education sphere. We must recognise that ‘powerful’ knowledge comes from a range of voices, rather than just the voices of just one particular demographic. In order for this to happen, we must first enlighten young people into the achievements of Black people throughout the UK’s history and educate them in the reasons why such achievement has not always been recognised. We must ensure that students of all demographics are aware of the way in which Black contributions have helped to shape UK society. We must aim to educate our students in the hope that one day they will work to dismantle the very systems that made Black History Month necessary in the first place. In the current climate, this seems like a huge challenge but perhaps, for many, an annual celebration every October is a good place to start. 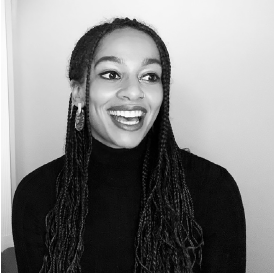 Funmilola Stewart is Head of History at Dixons Trinity Academy. In 2020, Funmi was delighted to have been appointed ‘Anti-Racism Lead’ within school and has begun to support colleagues in developing strategies to ‘decolonise’ the curriculum at Trinity. In addition to this, Funmi is working alongside the Dixons Multi Academy Trust’s Anti-Racism cross-cutting team in ensuring the new Anti-Racism policy is adopted across all schools within the Trust. Funmilola has demonstrated her commitment to anti-racism on a wider scale, contributing to articles in the Guardian, Black Ballad magazine and the Confederation of Schools Trust. She has also recently worked alongside the Imperial War Museum to create CPD sessions for teachers with a focus on developing decolonial approaches to the teaching of the British Empire. You can read the whitepaper she co-authored on Powerful Knowledge As Social Justice here.